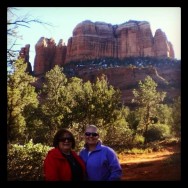 I fancied the idea of having an out-of-body experience when I was about 16 years old because I was going to use that opportunity to drift into homes and spy on all the boys I liked. What I thought I would gain by spying on teenage boys (doing who knows what in their bedrooms), I have no idea.

At the time, I was living in Upavon, Wiltshire, England, and I came across an advert in the back of a magazine to buy a booklet about astral projection. I’d heard that by applying this method, I could journey out of my body, a feat I thought would give me an edge among the other girls in high school.

So I mailed off my £8 to Heather’s Magick in London, and in a few short weeks, I had the book in my bare hands!

Needless to say, I was never successful at astrally projecting myself, and to this day, what boys do in privacy remains a mystery to me.

It was around that time that I became fascinated with the concept of enlightenment. It most likely manifested through my incessant romanticization of Beatles lyrics (in the best way a teenager with limited knowledge of the world could), but the concept stuck anyhow.

In college, I bought a book about Buddhism and learned more about meditation. I’ve tried different meditation techniques off and on for years, and I even took a class at the local Buddhist temple, but a quiet mind continued to elude me.

Until I visited Sedona.

About two hours north of Phoenix, you’ll find a magical place where visitors take in beautiful red rock scenery and immerse themselves in the energy of the vortexes. My mother and I once met up in Sedona to pump new energy into our relationship since she lives a state away. We hiked, ate great food, luxuriated at a spa, visited wineries, day-tripped to the old copper mine town of Jerome and visited psychics (because “when in Rome…”). One psychic told me, “Don’t put meditation on your to-do list,” which I thought was uncanny, since I literally had a to-do list buried in my purse (that the psychic did not see) that had the word “meditate” on it between “pick up dry cleaning” and “oil change Saturday.” My mother and I bought crystals and a few books about chakra cleansing, and we discussed meditation. As I sat in my pedicure chair, the nail techs talked about how Mercury was in retrograde (I had to Google what that meant), and the woman getting a pedicure in the chair next to me was friends with Marianne Williamson. It seems everyone in Sedona can’t stop talking about spiritual connections to the material world.

We hiked Cathedral Rock, located within one of the four vortexes in the area. We were both eager to check it out and see if we could actually feel the inner peace come over us, imagining some kind of magnetic jolt that could be felt singeing its way up our spines with each step up the rock. We kept saying to one another, “Do you feel anything yet? Are we in the vortex yet?” The altitude hit us both early in the hike, so mom stopped to take a breather while I continued on. I didn’t make it much further up myself because I tend to be adversely affected by altitude, so I took a seat a on a rock a few meters off the trail. I could see mom wandering around below me, pausing periodically and looking up, feeling her own brand of newfound enlightenment.

On another platform of the rock, there was a small group of women practicing yoga in silence, finally ending supine in shavasana pose. The foreign couple that snapped this photo of us stood quietly holding hands and gazing at the big Cathedral Rock behind me. Vortexes are supposed to be quiet, meditative places, but some hikers just couldn’t shut the hell up. As I sat in my personal meditative silence and tried to quiet my mind, I could hear a woman’s voice echoing and getting louder and louder behind me, not saying anything interesting at all.

When she got near me, she said, “So are you the gatekeeper?”

I wasn’t in her path. Isn’t there some kind of etiquette for vortexes and meditation?

I glared at her from behind my sunglasses and facetious smile. She moved on, continuing her conversation about nothing. And the two people with her, albeit more soft spoken, weren’t any more courteous. They rattled on all the way down the rock until their voices finally faded away and became someone else’s problem. In that new peaceful moment, I sat quietly and tried to think of nothing. I pressed my palms into the red rock to try to absorb whatever energy the vortex was emitting, convinced I was doing it all wrong.

Since returning to Austin and starting my meditation practice, I realize that is definitely a good word for it. Practice. Sure, I practice using my fancy “meditation” chair, but sometimes I lay on the floor, or I sit in bed or on the couch or in the backyard, or I take a walk on a quiet trail. Sometimes my eyes are open and sometimes closed. Some days are better than others, but most days the meditation is a game-changer. My outlook changes. My mental disposition improves. Things go well that day. I often hear people talking about meditation, but are they really doing it? Is one person’s meditation just another person’s prayer?

Back in Sedona when I settled in on my meditation spot on Cathedral Rock, I watched my mom wander around, stopping occasionally to stand in silence. I knew this was a big moment for her to which I was a witness. Seeing my mother “awaken” was for me the most valuable treasure of the trip. I’ve spent the last 20-something years seeking enlightenment and being open to transforming awakenings in my own life, and while she is just starting, it’s a new journey we can share and discuss along the way. I may not be 100% at peace with anything at any given time save for a few precious seconds during a 20-minute mediation session, but I am enjoying the journey.