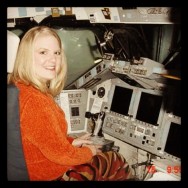 on working for nasa

Someone asked me the other day what I learned from working for NASA.

“Well, if my memory recalls,” I remember saying, like I’m some kind of throwback old fart from the last century. Oh right, it was like that. Because it was 2001, the turn of the century, and this little gal from Arkansas was working for the United States space program. Oh, precious insight that may still be tucked away in my mind’s SQL database, don’t fail me now.

Things were different back then….

I’d been laid off at the beginning of that summer. Married to a man I met on a blind date in college, we lived on a street called Poop Deck Lane. I had a yellow Sony Walkman that played cassettes. Around 9am every day, I’d crack open a beer, sit on the back deck overlooking a canal that offered a direct connection to the Gulf of Mexico and press play to hear “Harry Potter and the Sorcerer’s Stone” come alive before my very ears. This was my life.

And this was Houston — George W. Bush country — and all of my then-husband’s friends suggested I get a job at Enron.

“They just do stuff. I don’t know. But their stock is doing great, and they’re making a lot of money.” Literally. This was the answer. I was still downloading music for free on Napster, so what business did I really have to know the “truth” about Enron?

Houston was the fourth largest city in the country, so there was bound to be something there for me. The city had restaurants and shopping and theater and sports and concerts and night life. It had a Container Store! And it had NASA. I’d applied for a position as a technical writer/editor for an engineering firm, and it wasn’t until the interview that I learned the firm handled work for a NASA subcontractor, United Space Alliance. The hiring decision arrived quickly, and I celebrated the offer with my first karaoke experience. In my memory, there’s me, singing “Love Shack” in some bar in Lake Jackson, Texas, feeling like her world was about to change.

I arrived at the office around 7:45am. My commute from Poop Deck Lane was an hour each way, so I listened to a lot of radio. Pulling into the parking lot on Gemini Avenue in my red Ford Explorer was when I heard a plane had struck the World Trade Center. I rushed into the office and asked my colleagues if they’d heard that news. No, not yet. Over the next two hours, we all stood in awe with opinionated whispers in a conference room witnessing events that would reshape the world.

All astronauts on the Johnson Space Center campus were dismissed to go home, and my colleagues and I eventually went home early that afternoon. All I could think about on my long ride home was the ripping, raw anguish I knew so many families were feeling. A year later I’d be in Rome, walking into a TGI Friday’s during that first yearly “moment of silence” to get out of the heat. Later that afternoon, I bought a birra from a street vendor and lay on the grass in front of the Roman Colosseum and watched the sun set. But that’s another story.

After 9/11, my real work began with NASA. Within a couple of months, I was selected to work with a special team – the Payload Operations Support Tools (POST) Team – which was developing a suite of seven software applications that allowed for a payload customer (public or private) to develop their own payload with the assistance of NASA engineers. I eventually created a 900+ page interactive online help module that would be used as the training manual for these payload customers. In doing so, I got to learn all about space shuttle flight software, payloads, astronaut training and other space travel operations. I decided to resign from my position in July 2002 to embark on a life-long dream of mine to backpack through Europe.

When the space shuttle Columbia exploded across Texas in February 2003, I was interviewed to be on a special team of writers/investigators during the recovery process, but that eventually did not pan out for me because I didn’t have a strong engineering background.

When I query my mind with WHERE memory LIKE ‘NASA%’…I recall the little details that made that time in my life special.

—People are very nice at NASA! You know, it’s really a crap shoot when you accept an offer of employment because you have no idea how the people you are going to be working with are going to treat you and treat others. I was truly blessed to work with such genuinely nice (and of course brilliant) people.

—The contractor where I was assigned to work for the POST team had a cafeteria that showcased huge posters of each astronaut who has ever been assigned to a flight manifest. They were hung all around the walls near the ceiling – from the 1960s to the present. All of their official astronaut photos hung there while I grazed over the salad bar.

—That old “box” style TV that we all used to have… that’s called a Cathode Ray Tube, or CRT. For some reason, this was an interesting fact to me. There are several inside the space shuttle flight deck.

—My brief time in flight school (20 whole hours) during my senior year of college quite possibly afforded me the ability to land the space shuttle simulator in the motion base. It came down to me and the intern. The intern crashed the shuttle. I landed it safely, albeit on the grass just to the left of the runway.

—The day I visited the fixed base simulator (the one with the cargo bay joystick), a Johnson Space Center tour group was coming through. They all stopped and watched me through an upper gallery as I climbed down the ladder from the simulator, holding my notebook and folder. I thought, “Hey, they think I’m an astronaut.” I just smiled and waved like the pretend-astronaut that I am.

—Everything is carefully weighted on a space shuttle flight. Astronauts are limited on what they can bring, and the weight limit is strict. But my firm had something called the Silver Snoopy. It was this miniature Snoopy figurine that would join an astronaut on the mission. An employee was chosen for each space flight to view the launch in Cape Canaveral. Upon its return, the astronaut who carried the Silver Snoopy would just show up at the office and present the Silver Snoopy that had just been orbiting in space.

—Cookie time was daily at 3pm. “Cooooo-kie tiiiiiime,” she’d call out over the cubicles, pushing that cart of warm cookies up and down the aisles.

My time with NASA ultimately collided with the beginning of a new chapter for me – one of self discovery, new friends and an adjustment to single life. After all, I was sitting at my desk at 9:15am on a Tuesday in late February, when my then-husband called my old Nokia cell phone to tell me, “Well, we’re divorced now. It’s official.” There wasn’t much said beyond those basics. And just like that, I continued on with my day. Strange when I think about it now and the woman I was back then, driving my black 2002 Mustang “divorce edition” convertible and listening to Nelly Furtado and Third Eye Blind. I don’t even know that girl anymore.